I’ve never experienced a program with such power and potential than Neovim. It does so much and we are at the beginning as it isn’t even to a 1.0 release yet. The best part is the program works on Windows, MacOS, and Linux.

The following tweet encompasses my thoughts and feelings in my first week using Neovim.

Ok the more time I spend in Neovim... The more godly I feel. Seriously feels like I'm unlocking the meaning of life...
It is just better in every way once configured.
Thumbnail preview: pic.twitter.com/lOyZDXfRTf

Is this the path for you?

Neovim is rewarding after configured. The amount of automation, speed, and shear possibilities are limitless, but NOT without it’s downside though. I’ve spent hours working on my basic configuration and I am still months away before I will be close to completion. I say this as a NOOB! That is because I had no idea what a DAP, LSP, Linter, and other coding terms were before I began this journey.

If you know any of the coding terms and a little LUA, you will have a better starting point than myself. If not, get prepared to learn because there will be a lot of new terms and functionality you will need to know to get the most out of Neovim experience.

What I use Neovim for

With Neovim being so young in releases the latest release you can get is the best. Anything below 0.7 is too low as it won’t have the features you will need for the best experience. I highly recommend downloading directly from Neovim’s GitHub releases: https://github.com/Neovim/Neovim/releases/tag/stable

All dependencies and requirements are in my setup.sh for Linux and winsetup.ps1 for Windows from: https://github.com/ChrisTitusTech/Neovim

I modified PowerShell to also use Neovim. I did make a winsetup.ps1 to help aid in the setup, but there will be more manual steps to this setup.

Included cpp compiler and runtime to assist in programming, but the biggest thing to setup is nodejs. This has an automated script that will fix python and other dependencies that are problematic in Windows.

Setting PATH in Windows is your biggest priority for a functional Neovim. Type sysdm.cpl to launch into System Properties and click Advanced -> Environment Variables to set the paths. Add any missing health checks here.

Instead of making a big modular structure that you see in most Neovim projects, mine is small for ease of learning. It will expand as times goes on, but I want to KISS it… Keep it stupid simple. There is 3 files: 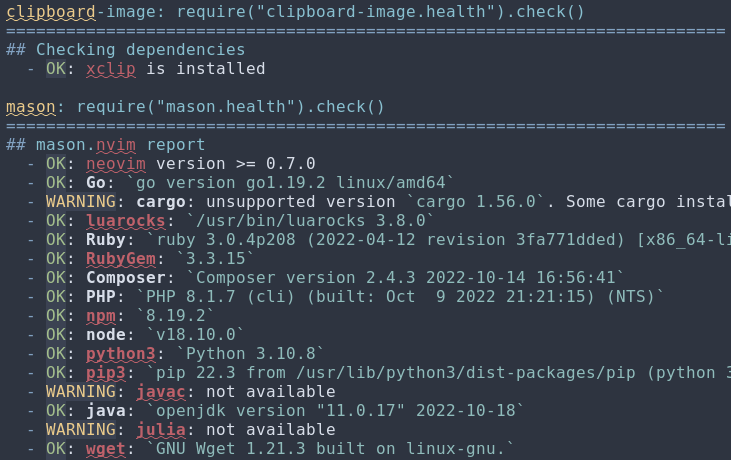 Errors must be fixed to have a functional Neovim experience. Warnings can be ignored, but noted, because you may have failed installs for LSPs, Linters, and other tools.

Note: I recommend ONLY installing what you USE!

What NOT to do

Neovim is such a powerful editor that it can do anything. Before you do this, ask yourself, “Do I use this?” and if not, do NOT install it!

If you want all the plugins and have every language supported, I’d recommend Lunar vim or NvChad. These projects do a fantastic job of emulating every part of vscode, while also having an easy install and setup.

I’d recommend installing them to see what Neovim is capable of, but I did NOT like them for the long term. This is because Neovim needs a personal touch to see its true power.

I fell in love with Neovim once I started to add the features I used. Remember, you can always expand later.